‘Minions: The Rise of Gru’ is a formulaic brand extension that will nonetheless please younger hardcore ‘Despicable Me’ fans

The little yellow creatures are back, though the film gives equal weight to the younger days of Steve Carell’s wannabe supervillain. 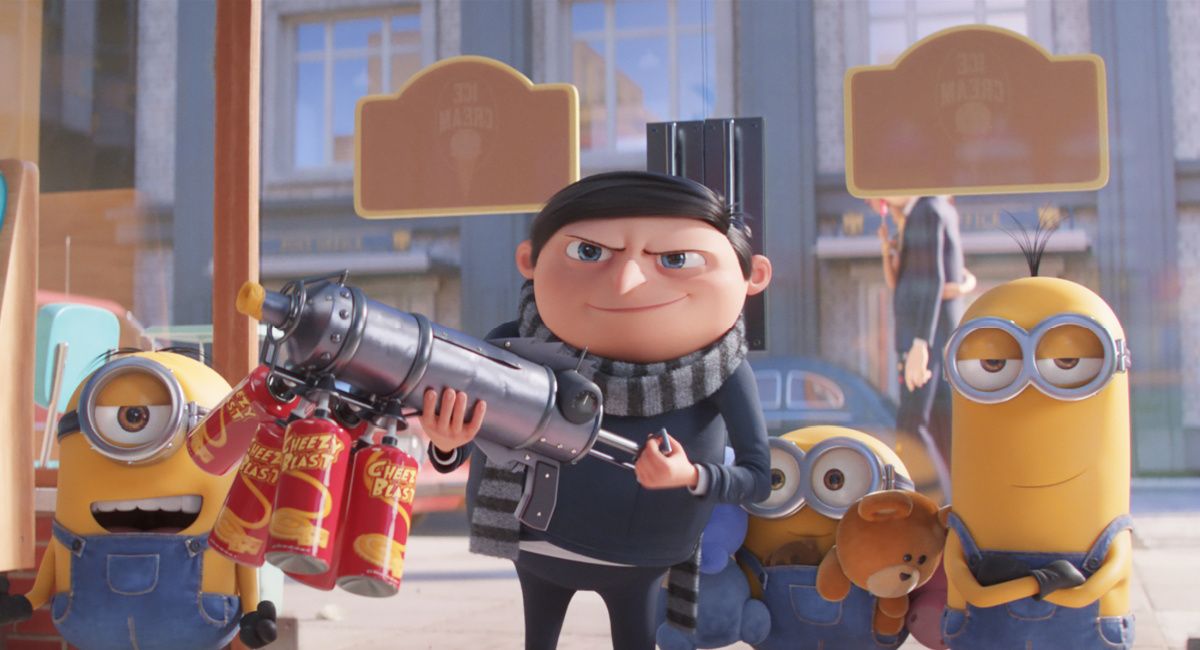 Aside from the language stew chattering of the Minions, perhaps the biggest sound to be heard from the new sequel/prequel/pre-sequel ‘Minions: The Rise of Gru’ is that of box-checking.

This 1970s-set story aims to fill in some of the gaps of Gru (Steve Carell) and the Minions’ early days together, so of course there are references to familiar ‘Despicable Me’ touchstones.

Intriguingly, though, figuring that everyone knows who Gru and the Minions are already, this latest Illumination offering opens not with either of them, but in an establishing sequence that introduces the big villains here. The Vicious Six, a gathering of flamboyant baddies led (initially – his betrayal in this initial scene fuels part of the plot) by Wild Knuckles (Alan Arkin), a white-haired former biker type who is on the hunt for a mysterious McGuffin known as the Zodiac Stone. He’s angling to use its mystical power to turn his team into the most powerful group in the world.

But, following an ‘Indiana Jones’-style quest that ends successfully, his gang steals the stone and leaves him for dead, replaced by new leader Belle Bottom (Taraji P. Henson), a Cleopatra Jones-style Blaxploitation spoof, all afro hair and slick gear. The rest are an assortment of weirdos, including lobster claw-endowed Jean-Clawed (Jean-Claude Van Damme), a strongman called Stronghold (Danny Trejo), a psychotic nun named Nun-Chuck (Lucy Lawless) and Swedish roller-skating baddie named Svengeance (Dolph Lundgren). Only Belle really gets much to do on the vocal front – the others are largely one-joke affairs with celebrity voices attached.

With a vacant spot on the Six up for grabs, young Gru is invited to apply (they think he’s a small man, not a kid) but is laughed out of their underground lair when they learn the truth. The ever-resourceful youngster, though, steals the Zodiac Stone, kicking off a plot that will rope in the Anti-Villain League, an acupuncturist who is also a kung-fu master (Michelle Yeoh) and a lot of crazed action with the Minions themselves.

Aiming to split its time between Gru’s young days and more Minion action (because, after all, they’ve already had their origin story), this latest piece of ‘Despicable’ filmmaking finds itself torn in two directions, even with a relatively simple story.

Director Kyle Balda, working alongside Brad Ableson and Jonathan del Val, must wrangle a script by Matthew Fogel (who shares a story credit with ‘Minions’ writer Brian Lynch) that wants to squeeze in as much madcap misbehavior as possible, juggling the new threat and some old faces all at the same time.

Where the strains show is in finding ways to incorporate classic ‘Despicable Me’ characters organically. Gru’s mother, of course (voiced once again by Julie Andrews in one scene) is here embracing the yoga lifestyle with her new “Guru”), while Dr. Nefario (Russell Brand), Gru’s future gadget man, is introduced working at Criminal Records, the cover store that hides the Vicious Six’s base. Naturally, he’s tinkering with gadgets in his spare time and gives Gru the first weapon that the young genius didn’t invent in his own room.

12-year-old Gru (Steve Carell) chats up the competition as he awaits his interview to become a member of the supervillain supergroup the Vicious 6, in Illumination’s 'Minions: The Rise of Gru,' directed by Kyle Balda. Photo Credit: Illumination Entertainment and Universal Pictures. © 2020 Universal Studios. All Rights Reserved.

Suffering a little from prequel-itis at times (we know how the story continues, so there’s little actual peril, which is less of a concern for an animated outing aimed at the younger market), there are explanations for how Gru’s first lair was constructed, and the school life that drove him to become an isolated, scheming sort who ends up redeemed down the line.

Carell, his voice pitched up to sound younger, is on good form as ever as Gru, even if we’re very used to the schtick by now.

The Minions, led as ever by Kevin, Stuart, and Bob (Pierre Coffin), are joined by Otto, an endlessly chattering example of their species who has somehow remained offscreen during other adventures. With braces strapped across his teeth, he’s excitable, easily distracted and not a favorite among the Minion population, though of course he’s given a chance to redeem himself.

Balda and his team have the most fun coming up with the usual silly situations for the Minions to find themselves in, including taking over a flight to San Francisco (which has been released as an extended trailer for the film and goes about as well as you’d expect). Otto’s explanation for how he was waylaid while bringing the Zodiac Stone back to the lair is also entertaining.

Mindful that this will end up on heavy rotation in households with Minion-loving kids, the filmmakers have at least made a vague stab at layering in references to other movies (the ‘Indiana Jones’ opening as mentioned, plus a screening of 'Jaws' and a nod to ‘Close Encounters’ among them). One plot point involving a pet rock with googly eyes could almost be interpreted as a nod to ‘Everything Everywhere All at Once’, though given that this was completed last year and delayed because of the pandemic, it’s just a coincidence.

‘The Rise of Gru’ is frantic and funny in fits and starts and is also the most visually polished movie in the franchise so far, maintaining the gangly humans/squat Minions aesthetic while adding in some impressively realized backdrops including San Francisco’s Chinatown and the lush, mountainous landscapes at the start.

‘Minions’ movies are rarely about much more than keeping the audience engaged, so don’t go looking for the sorts of deeply considered themes that ‘Turning Red’ or its ilk roll out within the animated adventure. If you’ve seen any of the two ‘Despicable Me’ movies or the first ‘Minions’, the idea of found family and accepting people for who they are run through here as they always have, but it’s nothing new.

The Rise of Gru’ is frantic and funny in fits and starts and is also the most visually polished movie in the franchise so far, maintaining the gangly humans/squat Minions aesthetic while adding in some impressively realized backdrops including San Francisco’s Chinatown and the rocky landscapes at the start. One for the youthful core crowd, then, but diverting enough even if you don’t sleep with a stuffed Minion at night.

Minions: The Rise of Gru

A fanboy of a supervillain supergroup known as the Vicious 6, Gru hatches a plan to become evil enough to join them, with the backup of his followers, the Minions. Read the Plot

New Trailer for ‘Minions: The Rise of Gru’

'Timecop' Is a 98-Minute High Kick to the Face: Podcast

‘Only Murders in the Building’ Renewed for Third Season