Natalie Portman, Chris Hemsworth, and Christian Bale shine in ‘Thor: Love and Thunder,’ which is a strong MCU sequel but not quite as entertaining as ‘Ragnarok.’

Director Taika Waititi goes to the well one too many times with similar jokes and set pieces as the last ‘Thor’ movie but still delivers a stylish and satisfying film. 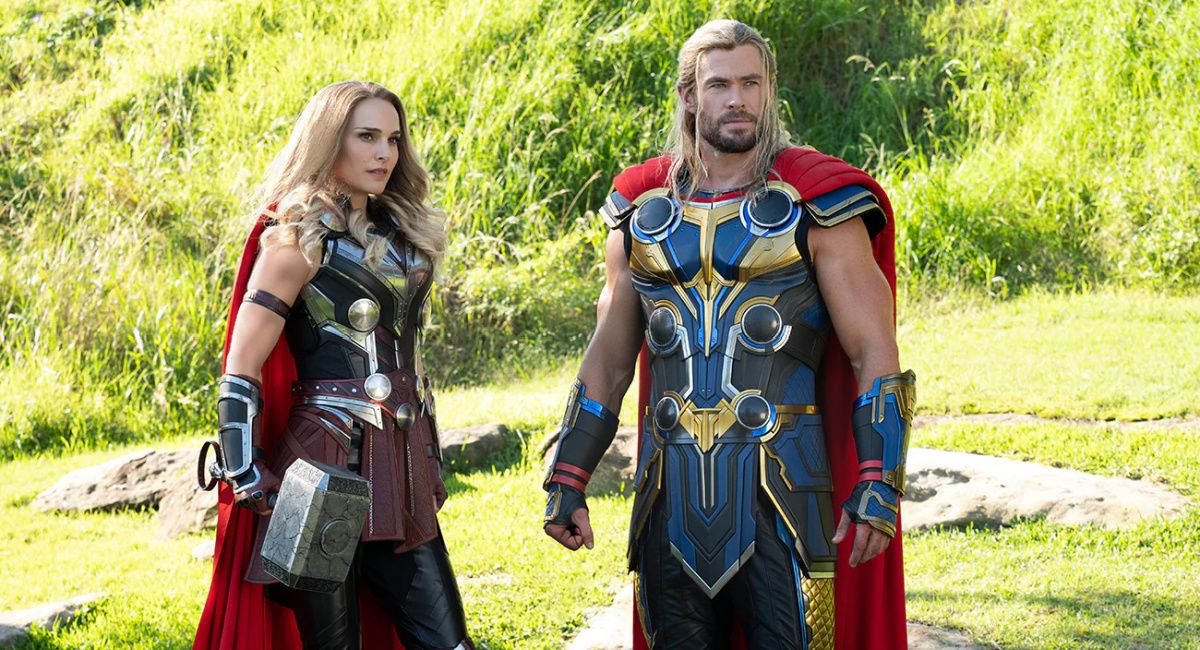 Opening in theaters on July 8th is the fourth film in the MCU’s ‘Thor’ series and a direct sequel to Taika Waititi’s brilliant ‘Thor: Ragnarok’ entitled ‘Thor: Love and Thunder.’

The result is another fun and stylish MCU outing from Waititi that features amazing performances from Portman, Hemsworth, and Bale, but tries to recreate too many moments from ‘Ragnarok’ and as a sequel never transcends its direct predecessor.

The film opens with Gorr the God Butcher’s (Bale) backstory, before a clever narration from Korg (Waititi) bringing the audience up to speed on Thor’s (Hemsworth) adventures with the Guardians of the Galaxy since we last saw him in ‘Avengers: Endgame.’ We see him transform from “Dude Thor” to his old self and then leave the Guardians with Korg when he learns of Gorr’s vow to kill all Gods. Worried about his fellow Asgardians, Thor returns to New Asgard to find King Valkyrie (Thompson) who has turned their town into a Disneyland-like tourist attraction.

Meanwhile, Thor’s ex-girlfriend, Jane Foster (Portman) is dying of cancer. She feels the broken pieces of his hammer, Mjolnir calling to her and she arrives in New Asgard to investigate. The hammer suddenly comes alive, rebuilding itself, and eventually transforming Foster into The Mighty Thor, which temporarily cures her disease. Thor is surprised to see his ex, as well as wondering why Mjolnir has chosen her, but teams with Foster, Valkyrie and Korg to stop Gorr. In order to do so, they will need the aid of Zeus (Crowe) and his fellow Gods to defeat the butcher before it’s too late.

I loved ‘Thor: Ragnarok’ and I would put it in the top five on my list of the all-time best MCU movies. But I only liked it on my first viewing, it took repeat viewings for me to fall in love with it. I had a similar experience with ‘Guardians of the Galaxy Vol. 2.’ ‘Thor: Love and Thunder’ was not quite as enjoyable for me as ‘Ragnarok’ but it is one of the better Marvel sequels, although technically it is the forth in the franchise. To that point, it is still far superior to ‘Thor’ and ‘Thor: The Dark World,’ which are among Marvel’s most disappointing.

I also love Taika Waititi and think he is a brilliant filmmaker and actor, but he goes to the well one too many times trying to recreate 'Ragnarok's best moments in ‘Love and Thunder.’ For example, Matt Damon, Luke Hemsworth, and Sam Neill return, now with Melissa McCarthy, as Asgardian actors performing a play, which is the same joke from ‘Ragnarok’ and was given more prominence but lacked the surprise the second time around.

Another example is the sequence in the court of Gods with Zeus, which is very similar to the "Contest of Champions" scene with Hulk in ‘Ragnarok.’ It seemed unnecessary to the story and just an excuse to fill the scene with Easter eggs.

While the musical choices are also similar to ‘Ragnarok,’ just swapping Led Zeppelin for Guns N’ Roses, it actually works exceedingly well and is explained by the story. But Waititi makes a bold choice by having the character of Gorr and his world presented in black and white, which is in stark contrast to the other colorful costumes and characters in the movie. While the film feels like it runs a little long, even at only 119 minutes, it's completely entertaining and Waititi fills it with his unique humor and point of view.

In his eighth full length performance as the God of Thunder in a little over ten years, Hemsworth has finally found his Thor, which has become his signature character as an actor. Let’s be honest, no matter what else he does in his career, “Thor” will be in the first sentence of his obituary.

It took Hemsworth a few movies to truly find the character, and it didn’t really begin to happen till ‘Ragnarok,’ but once he was allowed to inject his own humor into the character he became the Thor we all know and love. In ‘Love and Thunder’ Hemsworth continues the characters journey after the events of ‘Infinity War’ and ‘Endgame,’ by restoring the humor and insecurities that have made the God-like hero so relatable in the second half of Hemsworth’s tenure.

Christian Bale, who is of course no stranger to comic book movies after playing Batman in ‘The Dark Knight’ trilogy, gives a brilliant and terrifying performance as Gorr the God Butcher. Bale creates a sympathetic character that is not only truly frightening, but also a worthy nemesis for Thor and his alleys. Tessa Thompson also gets to build on her character, Valkyrie after ‘Ragnarok’ and ‘Endgame,’ and while the actress is excellent, I do wish we got a bit more of her in the film.

But the breakout performance for me came from Natalie Portman, who returns to the franchise after sitting out ‘Ragnarok.’ The Academy Award winning actress wasn’t given a lot to do in the first two ‘Thor’ movies, which is probably why she opted not to do the last one, but after a cameo in ‘Endgame’ returns thanks to a more pivotal story arc and likely the opportunity to work with Waititi. Adapting the "Mighty Thor" storyline from the comics allowed Portman to actually be a superhero too, and she is fantastic battling alongside Hemsworth.

However, I thought this was going to be a “passing of the hammer’ movie and it is not. I have news for you, Chris Hemsworth is here to stay as Thor. That’s fine by me, but I hope there is a way to bring Portman back again in the future. Her storyline was sad yet inspiring, and the actress clearly relished in having the opportunity to do more with the character.

There are two end-credit scenes, although I won’t give them away. I’ll just say that Marvel continues its trend of introducing a deep-cut comic book character played by a veteran movie star (see Charlize Theron as Clea in ‘Doctor Strange in the Multiverse of Madness’) or a fan-favorite celebrity (see Harry Styles as Starfox in ‘Eternals’) in the end-credits. It’s fun for fans of that particular actor or comic book historians, but the rest of the audience is often left scratching their heads asking, “Why is Charlize Theron in this movie?”

And for anyone hoping the ‘Guardians of the Galaxy’ actors would have major roles in the movie, I hate to disappoint you, but they don’t. While it was nice to see Chris Pratt, Pom Klementieff, Dave Bautista, and Karen Gillan, and hear Bradley Cooper and Vin Diesel, they are not in much of the film, so you’ll have to wait to ‘Guardians of the Galaxy Vol. 3’ to see more of their story arc. But I’m glad they concluded Thor’s story with the Guardians before their next full-length feature outing, and their appearance does add to the film.

In the end, I may have been a little harsh on ‘Thor: Love and Thunder’ and I really do hope that I will eventually love it as much as I wanted to, but for now, I only really liked it. Director Taika Waititi delivers a strong sequel, that tries too hard to recreate the magic of the last film, but is still entirely entertaining, funny, and action packed, and also features great performances from Chris Hemsworth, Christian Bale, and in particular, Natalie Portman.

‘Thor: Love and Thunder’ receives 4 out of 5 stars.

After his retirement is interrupted by Gorr the God Butcher, a galactic killer who seeks the extinction of the gods, Thor enlists the help of King Valkyrie, Korg,... Read the Plot

Thor is Finding Himself in the ‘Love and Thunder’ Teaser Trailer